Inside Taiwan’s Political Purgatory: Roundtable of scholars on Taiwan status (Part 19 of 20) 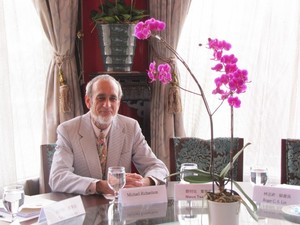 The setting was opulent, Taipei’s Grand Hotel. Built by Madame Chiang Kai-shek, the luxurious landmark hotel provided a storybook setting for the Roundtable.

A dozen distinguished scholars, all foreign-educated, representing a number of academic disciplines, were gathered to meet with Examiner. Some were former members of the Legislative Yuan while others had other government experience. All were currently teaching or writing and spoke in English to avoid any translation difficulties.

Each had a common question, asked in different ways, “What is the United States going to do about Taiwan?”

The context was a consensus opinion that despite talk about peace in the Taiwan Strait, the security of the island was very much threatened by the People’s Republic of China. Some talked of a crisis facing Taiwan under the Republic of China in-exile administration of Ma Ying-jeou.

One of the scholars, Ong Hoon-ting, followed up his remarks with the submission of a paper, “The Status Change of Formosa Under Reversed Hostility.”

Ong has written several books on Taiwan’s status published in Chinese. Two of the works are The Occupation and the Exile: The Two-Faces of Taiwan’s Status and Territorial Status and Formosa: A Global Perspective.

“For many years I have been quite involved in studying Taiwan’s status from the international perspective. I found there are certain patterns in world history regarding territorial status change. This inspired me to infer there must be models for Taiwan to follow to resolve the ambiguity of Taiwan’s international status.”

Ong blames Taiwan’s plight on something he identifies as Reversed Hostility. “During a war it is common that hostile parties gather within one camp against the other. Yet, it is not common that members of one camp can immediately reverse their position to fight against another member of the same camp. This phenomenon, termed Reverse Hostility, was exactly what happened at the end of World War II.”

“Without Reversed Hostility, territories previously under Japanese jurisdiction such as Taiwan, Korea and French Indochina would be simple cases as colonies and occupation zones waiting for final settlement. However, with Reversed Hostility the entire region of the Taiwan Strait is a powder keg from then until now.”

“Taiwan was initially occupied by Generalissimo Chiang Kai-shek on behalf of the Allies since 1945. Due to the 1949 Reversed Hostility in China, the Republic of China in-exile merged with Chiang’s occupation power to rule the region. In other words, there are two authorities, the occupation power of the Allies and the Republic of China in-exile, ruling Taiwan simultaneously,”

“Chiang Kai-shek was not authorized to change Taiwan’s status from an occupied territory to part of the Republic of China.”

“Regardless how much democratization the Republic of China in-exile has achieved, it is irrelevant to the status of Taiwan."

"While enjoying the fruits of democratization the people on Taiwan tend not to touch issues like the ROC government in-exile. They tend to forget that Taiwan remains as an Allied occupied territory pending formal determination.”

Inside Taiwan’s Political Purgatory: Next, Lin vs. United States (Part 20 of 20)